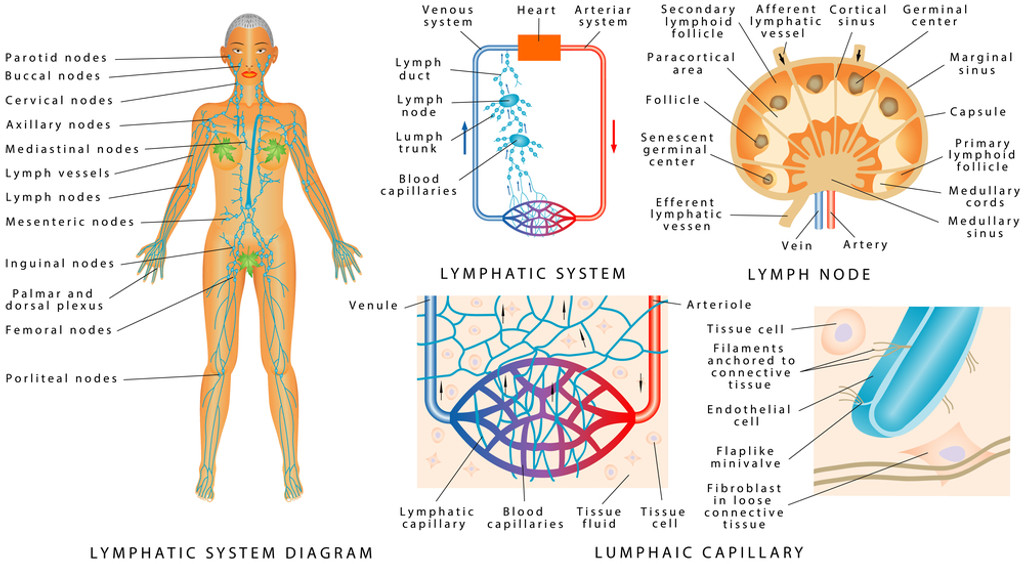 The lymphatic system primarily consists of lymphatic vessels, which are similar to the circulatory system's veins and capillaries. The vessels are connected to lymph nodes, where the lymph is filtered. The tonsils, adenoids, spleen and thymus are all part of the lymphatic system.

Description of the lymphatic system

There are hundreds of lymph nodes in the human body. They are located deep inside the body, such as around the lungs and heart, or closer to the surface, such as under the arm or groin, according to the American Cancer Society. The lymph nodes are found from the head to around the knee area.

The spleen, which is located on the left side of the body just above the kidney, is the largest lymphatic organ, according to the U.S. National Library of Medicine (NLM). "The spleen . . . acts as a blood filter; it controls the amount of red blood cells and blood storage in the body, and helps to fight infection," said Jordan Knowlton, an advanced registered nurse practitioner at the University of Florida Health Shands Hospital.

If the spleen detects potentially dangerous bacteria, viruses, or other microorganisms in the blood, it — along with the lymph nodes — creates white blood cells called lymphocytes, which act as defenders against invaders. The lymphocytes produce antibodies to kill the foreign microorganisms and stop infections from spreading. Humans can live without a spleen, although people who have lost their spleen to disease or injury are more prone to infections.

This set of testing panels includes:

Be the first to review this product.